I think having this relationship has taught me a lot of lessons.

Blink of an eye, and 2 years have passed…

It really does not feel that long! I think it’s really pleasant when 2 years doesn’t feel. Which means that you’ve grown to become comfortable and used to his presence, and you feel good about the relationship because it’s positive enough to make it seem not-draggy.

Note to self: You should probably ignore James when you guys have had a quarrel, because when he’s angry he’s a total asshole who doesn’t know what hes saying and would probably regret it later.

So, just ignore him until he behaves normally!

And everything will be fine. =D

Some valuable lessons this relationship has taught me which will go a long way:

1) Men are vulnerable to sexual temptations, usually more than women,
so if they make a mistake, search deep within your heart to forgive.

I used to have this thinking that if a guy ever lied to me / cheated on me, I’d definitely leave him for good and stuff..

But, well, I’ve come to realize that nobody’s perfect. And part of loving means forgiving and accepting.

2) Sometimes, men are not too good with words and usually have no idea what women are thinking,

so don’t expect them to always understand women’s reverse psychology.

I’m one of those girls who like to be petty and say “GO AWAY” but the truth is, I REALLY WANT YOU TO COME PACIFY ME!

Most girls are like that, anyway. When a guy gets angry, you should leave him alone for some time to let him cool down. He’ll contact you when he feels better.

When a girl gets angry, you should leave her alone to cool down for AWHILE and after you think she feels better, you’d better go make her happy and not leave her alone for too long or else she’d think that YOU DON’T CARE.

Yup. Actually women are not that hard to understand.

Guys just have to put more thoughts into things.

LISTEN WITH YOUR HEART, NOT ONLY YOUR EARS!

3) Say what you mean and mean what you say. And THINK before you say.

If you don’t mean to break up, don’t say you want to because guys usually take the first “I want to break up” sentence seriously but if you say it too often yet still stick by him, he’d probably take you for granted.

Everytime I quarrel with James, I try to reflect on my own actions and it actually helps alot to prevent future quarrels.

Know your own mistakes!!!!! It’s really frustrating to be in a relationship with someone who doesn’t know all their wrong doings.

Guys have super huge egos, so don’t call him things like “CHEAPSKATE” or whatever even if you’re just kidding.

And I GOT A MINI PERFORMANCE TOMORROW!!!!

I can’t remember exactly when was the last time I took the stage for a performance. I think in Primary School, when I was still in Choir!

Anyway, tomorrow me and Mr.Raymond Yeo will be singing a duet of “Can’t Take My Eyes Off You” at Punggol Park after the Cross Country,

So look our for us and cheer if you are from my school!!! =D

Ok anyway here are some pics.

I’m way too tired to create a very wordy post.

On the night of our anniversary, he disappeared for a few hours and told me that he was off to “do something”…

I waited and waited for a few hours, and then he suddenly popped out of nowhere just as our anniversary was ending and hugged me and kissed me, then told me to look out of my window! 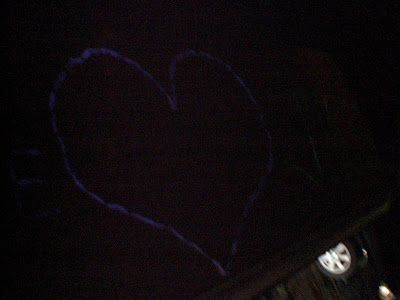 Something glowing in the dark! 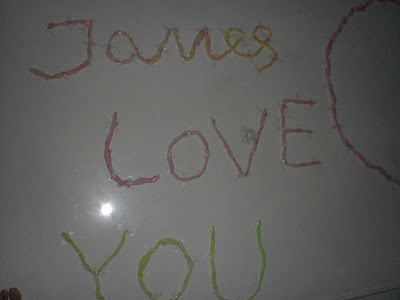 I saw colourful words of “JAMES LOVE YOU, *heart* JESS”

Hahaaha he’s damn cute la, instead of “I LOVE YOU” he put “JAMES LOVE YOU” as though Jess and You = different people. “James love you” is kinda third-person ish. LOL.

I couldn’t capture the words properly because it was very dark already. 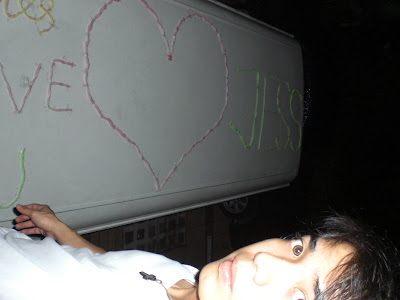 The man himself and his erm.. masterpiece

I wont tell you what he “wrote” the lightstick-words on.. LOL~ It’s something very cute, only me and him would know!

It is simple yet so super sweet.

I know he’s not the kinda guy who would do such things for his girlfriend. He only brought his ex to a nice dinner for their 2 years anniversary!

But for our 2 years, he actually bothered to do this and bring me on a romantic beach holiday and accompany me to Avril Lavigne’s concert.

All his wrong doings are currently forgiven, wahahaha.

Anyway, we would be going to Pulau Besar on the 3rd because I would be having my September holidays then! Yipeeee.

I cannot wait to go Jet Skiing and frolicking around on their supposedly gorgeous clean and clear beach!

I wanna go snorkelling! OMG. So many things I wanna do. I know it’s gonna be perfect.

So exciteddddddd. Fishy fishy! I have been waiting to go snorkelling / scuba diving all my life. 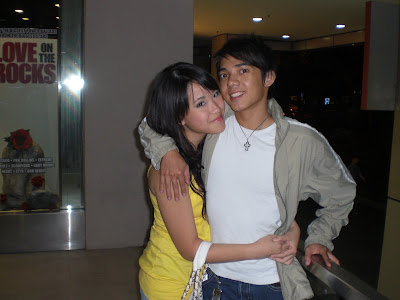 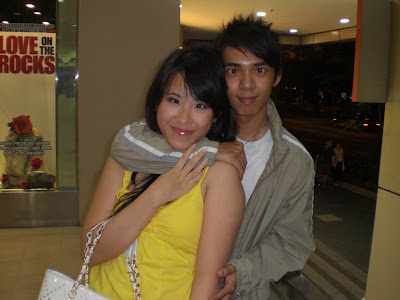 HAHAHA this is so fucking cute.

It was supposed to be a normal shot, but we had so much telepathy we just did the cross-eyed silly face together!

Imagine our laughter when we looked at the camera after that. I wanted to see his annoyed reaction to my stupid face, but then I saw HIS stupid face… HAHAHA.

Turned out we have more in common than I thought =P