I feel so sian I think I feel like I could melt away right now. I am sian square. It’s like going to midnight, and I don’t feel like doing anything – except maybe jumping down from the window beside me. Something to make me feel alive. (But then I’d die few seconds later so hmmmm.) I don’t feel like talking to anyone currently, except my boyfriend, but he’s WORKING! BOOOOOOOOOOOOOOOOOOO.

There’s no word to describe the feeling. The closest term would be “WTF”.

I know he’s 19, yeah yeah, he needs to work, but you can’t blame me for getting upset over it still, can you? I’ve already been feeling REALLY moody recently. He’s going to be so busy with all of his stuff, I’m not sure where that leaves me?

Ugh. Enough of that. I’m sick and tired of talking about how unhappy I am, because I’ve been doing alot of that these few days.

He came over to my place after work yesterday and stayed over my place, then he sent me to school today morning – had some farewell thing with my class. We reached like an hour and half early (8+ am), so we had breakfast somewhere nearby. Before that, he didn’t know the way to my school from my place, then he got all mad when I told him I didn’t either. He’s like, “You go to school everyday but you don’t know how to go?!”

Well forgive me if I don’t notice which road to turn left or to make a u-turn at, but since I don’t intend to be a taxi driver in the future, I don’t see the need to.
In the morning, I’m too busy sleeping on the bus or being half asleep.

I wasn’t the one who checked the street directory last night and said “Ya, I know, I know la.”, ok? You need to control that temper of yours!

I feel better after letting that out

Ok, so that wasn’t really “light-hearted”

I don’t want to complain to him, because then he’d say I’m petty. Nonono, I must not let him have any more chances to “say” me!

You, the person who is reading this, can know that I am petty petty petty because, you are not my boyfriend! I don’t have to worry about you ditching me :}

And I could care less about what you think about me. – (Unless you’re reading this baby?! If you are YOU KNOW I LOVE YOU RIGHT??)

So like, It’s Christmas, but I’m not in the mood – at all. All the pretty lights make me feel happy though ^___^

And Christmas gives me a reason to stay out past midnight. You don’t know what a girl like me goes through to get that bit of freedom. -_-

I got a haircut recently, at Jean Yip’s Hairdressing, and I don’t like it much. Not much difference from my previous hairstyle anyway, except for the new “not long not short” spikes on the top of my head now.

I think my memory’s getting from bad to worse! I can’t like remember stuff I did this week.

Ok so I went ice skating with James. The first time (like weeks ago already – I haven’t updated in so long!), I went with two of his friends and him so it was like the four of us, but the rink was CLOSED! Bugger

I was looking forward to skating so much, but whateverrr. We went to catch a show instead, “Tenacious D in the Pick of Destiny”

I’d say it kinda sucked, because for someone as easily amused as me, I didn’t find the jokes all that funny – but the guys thought the show was good anyway. They probably liked the “cock push up” thing. (People who have watched the show will know what I mean)

So I went back there again next week, with another two Different friends of his, and motherfuckinghell it was closed again. See what I mean? It’s like the same thing with my previous posts (see below). I am cursed or something.

I was like “ZZZZZ” already, but we went to Snow City anyways. Fun xD Ice kept getting into my pants though, maybe they were too hipster, and they HURT! Especially when I was sliding down the slope, the ice scratched me and it was like OWWW. Man, even ice wants to get in my pants, probably must’ve been pretty hot in there! =D

When I came out, my ass was covered in ice. Literally, ice stuck onto the back of my jeans and won’t come off. And my whole leg and butt was RED! Really red. Think it must’ve been too cold.

Third time I went with James alone, and I was SUCH a failure at skating – the moment I got onto the ice I was like slipping already. I have NO idea how to skate?! I stuck to the side of the rink the entire time – I fell down a couple of times, soooo embarassing. And it’s so hard to get up when you fall! So I ended up falling, trying to get up and falling and yadda yadda. =(

My butt hurt alot that day. T_T I also fell down the stairs in the morning when I was on the way to James’ house – FUCKING WEATHER SUCKS!!! Rain rain and rain.

Anyway, a few days ago I was at Cineleisure with boyfriend. You know how they always have some sort of thing outside Cine? Yeah, that night James’ cousin happened to be somewhat in charge of the event. They were playing some games, and I kinda got pulled into one of the games – It’s like a competition betwen two couples, the girl is blindfolded while the guy has five stickers pasted randomly ALL over his body. The ladies are supposed to peel off all the stickers from his body, and the first girl that achieves that wins a couple Swatch watch for herself and her boy.

It was really funny, cuz you had to feel all over his body to find the stickers! And in front of a crowd. There was this one part I accidentally touched inbetween his legs (I was blindfolded!), and those people were like “OoOooh”.

But I won anyway! 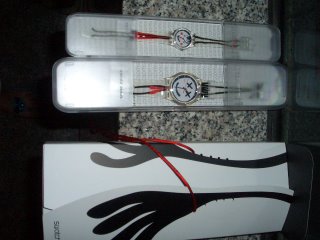 Oh my god, these few days I’ve been leaving the house without make-up SO often! It suuuucckkksssss. I feel so FUGLY when I don’t have make-up on. It’s like my best friend now. It’s kinda sad when a girl gets too reliant on make-up, but if you’re a girl, you’d know what I mean.

Ok, I’m starting to bore myself already. The rest of the week, I was out in town watching movies, eating, shopping, went to Fort Canning Park to romantic with boyfriend, etc.. Christmas is like two days away!

AHHHHHH what should I wear what should I do where should I go?! I’m kinda disappointed that my dad didn’t bring me to America for Christmas like he promised. Bah. =(

Celebrating christmas is NO fun at all in Singapore. Pfffft. So what if every street in Orchard is bombarded with Christmas decors?

In fact, Singapore is hardly any fun at all. I don’t know why tourists would even bother coming here.

To see birds in Jurong? Or to watch lions in a Night Safari?

Perhaps the only thing UNIQUELY Singapore is the Kia Su people. You won’t find a more Kia Su aunty in any other part of the world. I’ve seen so many ugly Singaporeans, I feel pretty disgusted. I don’t see the kind of life I want to live in the future in Singapore.

I don’t have much to boast about my country when I talk to foreigners, honestly.

Sure, we are relatively rich for one of the smallest countries in the world, we have nice char kway tiao, we are pretty “safe” (at least we’re not allowed to carry guns aound right?),

FUCK YEAH!! TAKE ME TO WHERE I BELONG ALREADY.

Materialistic much! I suddenly feel like I have soSO much to blog about, but I don’t think I’m in a right state of mind to blog already, my tiredness is making me sound like a drunk person.

I think I’ll go sleep before I start making no sense and bore the hell out of you, or have I already did?

P.S I don’t like my blog skin alot anymore, I’ll change it when I’m free.