Celebrated one day earlier on 19th September with the people who make school life less torturous..

They came over and they bought like 7 packets of my fav cheese cracker. LOL? Totally random but totally appreciated. Of course I finished the crackers within a jiffy!

Basically the whole day we were playing Wii, sitting and chilling, went swimming, playing truth or dare and the usual fun stuff we got up to.

I’m veryyyy tired cos I just came back from one great Family Day… Totally awesome but thats for another post next time!

Won’t elaborate much, let the pictures do the talking~~

I love the golden sun rays in this picture

Makes everything seem so warm and lovely.

But thats cuz they’ve all got their swimwear underneath their clothes. LOL. I was lazy to cover up.

Thank you to these adorable people for the fun I had that day!

HAHAHA I super love my condo’s set up and environment

Look at our background! Looks like we’re at some sort of “nature-ish” resort… MAN, LIKE PULAU BESAR!!!! (minus the mosquitoes)

Everybody get ready to JUMP!!!!

Hehehehe it’s so cute how everyone disappears underwater..

The other time I went swimming with Fidelis, her make up stayed on right through!!!!

Cos it was waterproof.

I wanted to try it out myself so I applied light make up and went inside the pool… To my dismay, everything was washed away and I was bare faced once again =(

So much for waterproof make up. Stupid sales girl cheated my money T____T

So if you’d always been wondering how I’d look like “bare” without the fake eyelashes and all, behold the next few pictures!

And don’t say I don’t post pictures of myself without make up anymore ah.

Gosh I love this photo to death. It really makes me smile!

Can you differentiate us? LOL.

I think me and my girls look alike when we’re without make up!!!!

(We all look crazy is what I mean lmao)

I think everybody looks so cute here. Like so fresh, and so silly looking. As though we’re all taking one big bath together. LOL

And then we left the camera in the bag and had more fun ourselves.. Hahaha I’m not gonna describe it much, some things are better left being personal memories.

When night fell we ran up (super cold cos no towel. LOL) and showeredddd. All the guys showered together in one bathroom and all the girls together in another!

Everyone clean after a refreshing shower!

Duhhhh like SO MANY PEOPLE PACKED ON MY BED.

Even though my room is relatively small, thank god I have a queen sized bed!

And then after that…

HAHAHA no la not really. I just did tortured 2 guys and did what I liked to them.

By the time I was done with them, their cheeks turned bright red..

Cos… I WAS APPLYING MY MAKE UP ONTO THEM!! HAHAHAHAHA.

HELLO JONATHAN, my next victim!!! Very reluctant at first but became willing afterwards.

They were trying to take a saucy picture.. But I stuck my head in.

HAHAHAHAAH THIS IS DAMN PRICELESS.
WOOOHOOO!!!!!

I love these guys, they are damn spontaneous, thanks so much for letting the birthday girl to have her fun and draw on your faces. LOL.

Everyone roared with laughter and literally went mad seeing them like that.

After a while, Jonathan couldn’t take it and went to wash off allllll the make up I slapped on him….

HEHEHEHE now he looks EVEN CUTER!!! Like some adonimabal snowball.

Wait. Or is it abominabal? Wtf? How do you spell it?

We were chilling in the room and it was very funny cos alot of us were tired and wanted to squeeze onto my bed to sleep!

But obviously when you put so many idiots like us all onto one bed, the last thing we’d get is some peace and quiet.

Annoyed each other and did silly things till it was almost 12!!!

Ok here’s the story – I don’t like chocolate stuff. Most birthday cakes are chocolate cakes. So one day I casually told them, “Next time my B’day get me Pandan cake instead of Chocolate ok!”

OMG THEY REALLY DID.

I think this is the first and last time I’d ever cut a Pandan Birthday Cake in my life!!!

Everyone wanted a piece of my pandan cake…. =(

After cake session, we proceeded to play Truth Or Dare and the usual.. Some people went home since it was near midnight already, and some more new people came!!!!

They started to drink… But I stayed away from the alcohol.

I HATE ALCOHOL!!!!! (Tiger Beer is the only thing I don’t mind to drink once in awhile)

Someone was dared to STRIP and do a SEXY DANCE for us!!! HAHAHA.

They dared me to go under the table to take super ugly pictures with my face squashed against the glass surface.

…Too bad, you guys won’t get to see those fugly pics. LOL.

Ber looks so funny in this pic, and Mel looks so happy + cute!!!

I forgot what time they went home, but I knew it was pretty late..

Ber and his friend accompanied me all the way until James came over!! THANK YOU, LOL.

And then I hugged James to sleep and that was the end of my day.

I am making such a big deal out of it because I’m very happy to be alive. Hehehehe.

…Blink of an eye, another year has passed.

It’s this crazy rollercoaster ride that I’m on called LIFE.. going wayyy too fast for me to catch up with sometimes. Ups and downs and ups and downs..

Well, I’d like to share with you guys the most important life lessons I’ve learnt since I was 15!

Love your family, and show them that you care. Stop giving them attitude, and be more kind to them. Treasure time spent together. They are the most important people in your life, they are the ones who will stick by you through thick and thin. In short, love them with all your heart.

If James is being a fking idiot, ignore him. He will come to his senses (eventually, I hope) and return to his normal self. In the mean time, keep yourself occupied to prevent from going crazy. Don’t be petty and quarrel with him over the littlest things! Be the best girlfriend that you could ever be, so when things finally still end up wrong, you’d know that the problem doesn’t lie with you and things really can’t work out afterall… There is a closure, that way. So moving on would be easier.

Friends walk in and out of your life. The most important thing is the footprints and memories that they have left behind..

When everything seems to be going wrong, keep your chin up, Jess. Take comfort in knowing that since you are already at your LOWEST point, you have nowhere else to go but UP! So things will get better, eventually.
.
.
.

Understand that ups and downs are parts of life. Through betrayal, lies, hurt and grief is how you grow to be a stronger person. You’re not the only one facing shit anyway. Everyone else is, just in different ways.
.
.
.

You are your only reliable friend. Like I’ve said, friends come and go, you may not know who to trust but it’s always best not to give 100% to anybody.. Including James. Just keep that last few % to yourself.
.
.
.

Though it has its significance, studying is NOT the most important thing, contrary to what EVERYONE has been telling me. Frankly speaking, I value the life lessons I’ve learnt much more than how to mix chemicals together in the lab.
.
.
.

Follow your heart! Somehow, you always know the right way to go. Trust yourself. Be gutsy. Life is way too short to not take risks.

Ignore any comment people make on you which you do not agree with. Afterall, these people may think that they know you, but the fact is that they don’t. People can talk shit all they want, but you know you’re better than to stoop as low as them.. Assumptive judgemental dicks are all around, so be firm. They cannot bring you down, because nobody can, except yourself. So stay strong.
.
.
.

Happiness comes from oneself, it is true. You can have all the riches in the world but still not be happy. But I’m happy. Because I learn to appreciate what I have. And who said that one can’t be happy even when things aren’t going right for her? I can. Because I know, that happier days lie ahead.

But really, the things above mean alot to me, it is truly what I call “Growing up”.

P.S – a big big thank you to everyone who bothered to remember the date and wish me happy bday! hehe. it makes me happpyyyyy.

My brother is going through rough time right now.. Can’t say what it is cos it’s not very nice to disclose family affairs, but I decided to be a sweet little sister and get him a birthday gift!!

He has been singing praises about this game called “ROCKBAND” for a long longggggggg time..

He always goes over to his friend’s house to play it, and he has been bugging me to contribute half the money to buy it so we can play it together.

I’ve always refused coz must buy PS3 to play with it and like total cost would be so exp! I don’t even life Ps3 games in the first place.

So a brilliant idea struck me – why not buy ROCKBAND – Wii VERSION??!

WOOOHOOO I LOVE Wii okay. I’ve been obsessing about it ever since I ever laid my eyes on it.

And TADAH, matter resolved = I buy the Rockband, (almost $400! Don’t you wanna be my brotherrrrr) and

MUMMY buys the Wii for us! 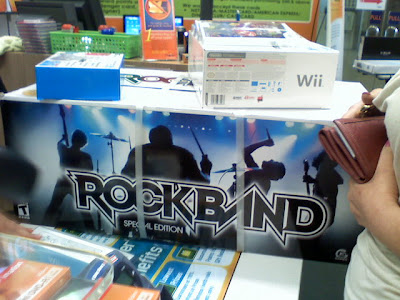 Mum with her wallet at the Challenger counter, all ready to LOSE SOME CASH… 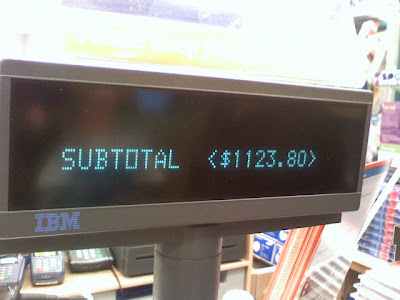 We are damn bo liao. 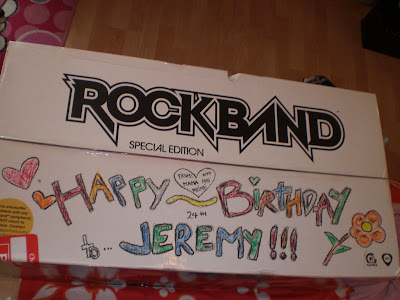 See that heart in the middle? It says, “FROM MA MA AND MEI MEI” 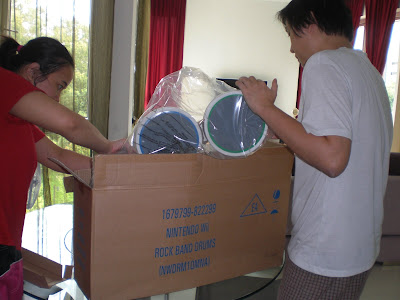 Maid and Bro trying to fix up “ROCKBAND”! 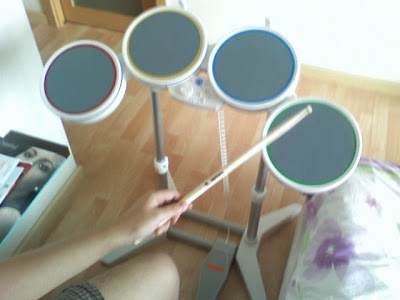 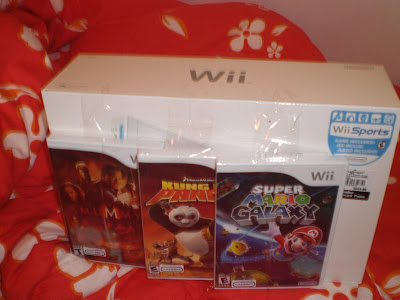 My bundle of games. The mummy, kung fu panda and mario. LOLOL 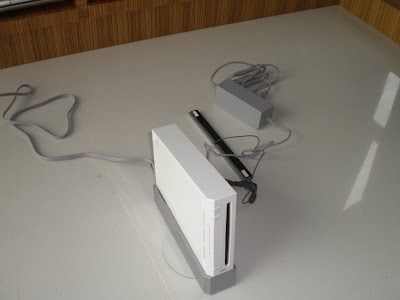 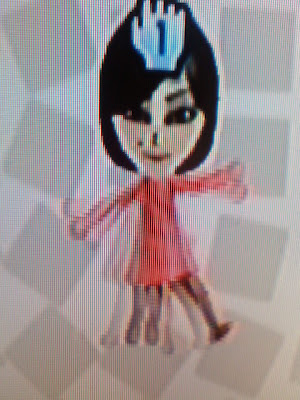 And erm… This is my Mii character. LOL. I know it looks nothing like me o____o

My mummy loves me soooooooo much that she decided to spoil me with more gifts. 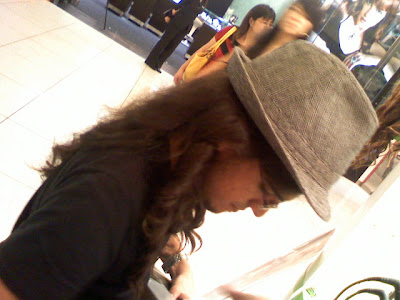 HAHAHA this guy is so hilarious I tell you. He’s a hair-curler-promoter.

It’s hard to explain what he said, but really, his pushcart is at VivoCity so check him out if you’ve got the time. 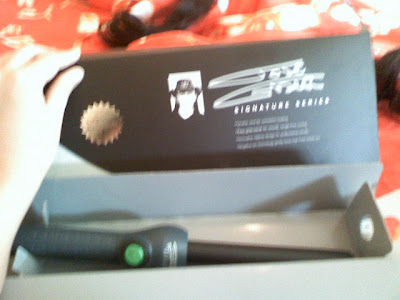 This hair curler freaking costs $160!!! So it’d better be goooooood.

It’s so expensive because it has a ceramic core instead of your same old Metal type. Ceramic won’t burn you! I’ve seen some really sua ku people who wanted curls and used tongs and ended up with scalded faces / hands instead. LOL. 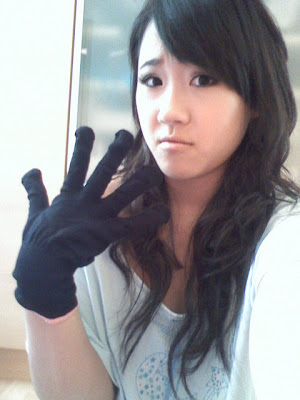 It even comes with a erm… dubious glove. 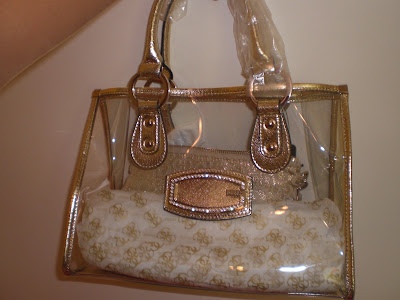 Besides the hair curler, she bought me a $160 GUESS BAG!

But since everyone can see whats inside my bag I cannot anyhow dump things inside already. Boo. But easier to haolian branded wallets like that. LOL~~ It is soooooooooo hot.

AND I LOVE MY NEW GOLD GUESS BAG TOOOOOOO.

Ok ok and besides the freaking Wii and the hair curler and the guess bag, she ALSO got me a.. 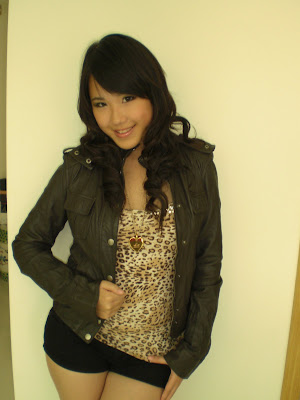 Of course, all the presents I picked myself one la… 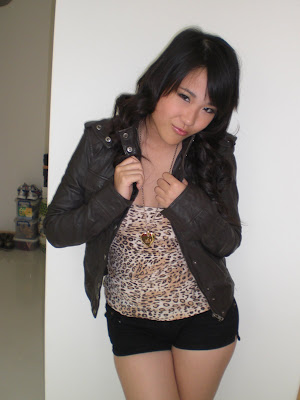 Omfg I think this is like the hottest ever. Shit, all my B’day presents are so HOT, HOT HOT!!! 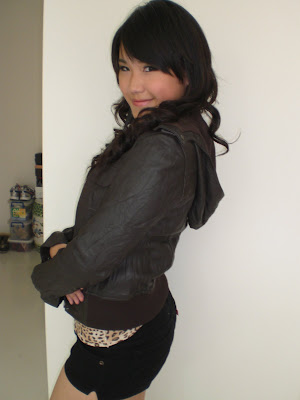 I am obviously one

LOL I also dunno la. BUT I LOVE YOU MUMMY! (I havent paid her the $400 rockband yet. OOPS LOL just remembered)

I am going to get her a VERY NICE PRESENT for her B’day next year! Muahahaha.