…What he gave me for our 1 year 9 months anniversary. Hehehehe.

Don’t you think it is extremely sexy?

Well, much like the images you see about, the fragance has an extremely seductive scent to it. Pretty long lasting and a really rich smell!

I am very happy that he actually bought me something! This perfume is not cheap leh, I think it’s around $180?

I’m not happy because I gained something expensive – I’m not that materialistic. I can satisfy my own materialistic pleasures, thank you very much.

I’m happy because I know that James doesn’t EVER splurge on things, and I know he’d never buy something that costs this much for himself!

…All these is he say one ok. I’m merely repeating what he said. =P

Woot woot woot, can’t you tell I’m in a very good mood today? I know, a world of difference from yesterday!

I am constantly blogging nowadays, I think all of you should thank god that its my holidays now!

I have E Math mock exam today but I skipped it. Would have fallen asleep even if I went, so didn’t wanna waste my time..

I JUST HAD CHINESE O LVL YESTERDAY!!!!! And now I have soooo many more shit to go through?

And for the upcoming weeks, I have lots of holidays classes + more exams + more tests. Sheesh.

They want to kill us students, is it?

I am obviously not going to bother about exams for the moment, I have to seriously think what kind of hairstyle I want!!

While I was googling hairstyles, I came across this photo:

I must get something done by tomorrow! Geez. Either do my hair or my nails or my eyelash extensions.

Yes, indeed, I am feeling so much better.

Will you people talk to me on Chatango or leave tags in my tagboard more often? Now that it’s my holidays, I’m ALWAYS at home and ALWAYS in front of the computer screen and it gets damn bloody boring!!!@@ =(

So, do entertain me alright? Heehehe.

Anyway, I got over the whole drama banana thing of “ruining” our anniversary.

I figured it wasn’t such a big deal, so I got over it and went out to a nice family dinner with mum + bro… and then we walked around and I SAW SOMETHING totally cute!!!!!

I saw ELMO and Tazmanian Devil and lots of adooooooooorable ones.

I wanted to make James wear a bright red elmo tee, but I figured he wouldn’t be so into wearing a red shirt. AND SO!!!

After spending 15 minutes standing in front of the rows of printed tees, I settled for these two: 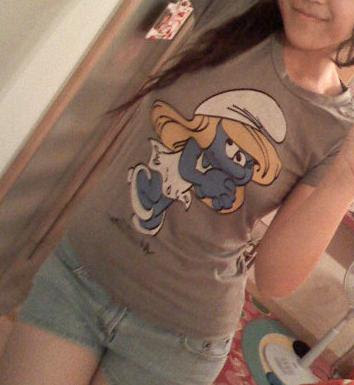 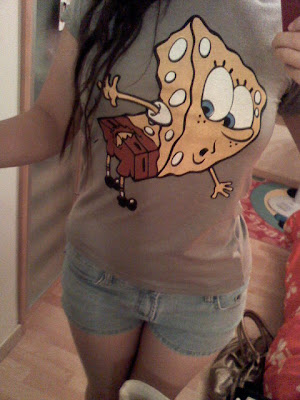 Freaaaaaakin’ adorable, or what, you tell me?!? I wanted to buy Elmo, Tazmanian Devil and other adorable stuff but I settled for these two because:

The smurfette really reflects my personality. Ever so vain! The narcissism is overwhelming. Always acting like some itsy bitsy princess.

The spongebob really respresents James. LOOK AT WHAT THE SPONGEBOB IS DOING!!!! Hahahaa. Pointing to a hole in his pants @ his ass.

Totally annoying and adorable, just like James!!! Only siao char bohs like me will find spongebob + James irresistable.

Don’t ask me where I got these tees, I don’t want people having the same as me and James! =D

I’ve wanted a couple tee for so long, but the “I love my boyfriend” or “She’s my girlfriend” thingy is SO overrated! Worst still – the puzzle pieces tee.

And so many lianbengs are wearing it.

I don’t care if alot of the ahlians / ahbengs like Spongebob as well, because they are shitheads who just follows the superman or polkadots or two-coloured skinnies trend. They should get a life, and have their own style instead of following trends blindly.

Then again, “looking like trash” is a new trend invented by them.

I had a commercial-ish shoot a few days ago in a store. I was very happy that I had a make up artist and all (at first) but then I realize why I’ve declined having MUA for my shoots for so many times!

Because it’s DAMN uncomfortable when they do the make up for you! ESPECIALLY when the faggots try to curl your lashes or apply mascara.

They keep telling you “LOOK UP” and “LOOK STRAIGHT” and keep probing your eye. So much that you wanna scream, kick and punch her and tear up.

It’s nice to go to a shoot barefaced (dun need to do anything! just sit there let people doll you up… weeeee) but to my fuckingabsoluteHORROR, the MUA didn’t apply eyeliner or give me any eyelashes. Instead, gave me a hell load of foundation + eyeshadow.

HELLO?!?!? Do you know how awful I look without fake eyelashes / eyeliner?!? I’ve received quite a few photos already, but they havent been processed properly yet. So far, this is the only photo I think doesn’t look THAT bad: 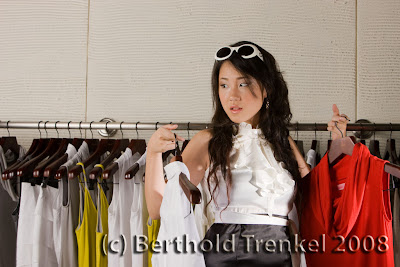 The awkward “wtf” look on my face was intentional. HAHAHA. I know, this looks bad already, can you imagine what the others look like?!?

In this shot, I’m portraying the “OMG I DUNNO WHICH TO BUY!!”-look. Which I think I’ve pulled off pretty well. HAHAHAHA.

Anyway, even though I look awful (MUA’s fault) the photographer is still wonderful. His shots have great commercial appeal. Would love working with him again, only if I have a better MUA or I get to do my own make up!!!!!

And not forgetting, he is RICH! You should see his condominium, it’s a 3 minutes walk away from ORCHARD ROAD.

Then again, mummy is buying a new apartment near orchard also!!! It’s called “Soleigh”, if I’m not wrong.

We have the BEST environment here ever!!!

I really like those condos where once you get into the lift, you press your floor and Hey Presto! No corridor, but the lift opens directly to YOUR apartment, and YOUR apartment only. Very cool indeed.

Photographer’s an angmoh, has a korean wife and 2 very adorable kids! AND, One huge ass expensive posh house, I can’t even go into the details, I’ll die of jealousy. He has a few cars and a personal chauffeur / assistant.

Sheesh. Everytime we need to change clothes, the chauffeur will drive us back to his posh apartment to change, then drive us here and there to different locations to shoot, carrying all the stuff. I don’t mean this offensively, but he was like a maid! Attending to everyones needs. Except he’s much more pleasant, very efficient and professional. I like him very much, even though the bugger keep shining the BLINDING light into my eyes with the reflector.

GOD I HATE REFLECTORS AND THE SUN. I HATE SINGAPORE’S WEATHER.

The shoot was in a store in town. Sorry, can’t reveal anymore details about it, promised photog and store owner! Not until the photos and everything is up, anyway.

Still cant get over the make up disaster…

I’d rather do my own make up – I usually look alot better. The only GOOD make up artist I’ve met so far is Lionel… the one who did my diamantes shoot.

Teehe. Still loving these photos to death. MUACKS LIONEL! I must have another shoot with you soon.

Ok la. I am bored of talking about shoots already.

AND I FEEL SOOOOOOOOOOO DAMN… pissed off. At what, exactly? I’m not quite sure.

Maybe cuz I find everyone to be so, so superficial.

Just when I thought somebody is treating me nice, the person turns around and stabs me. Sian.

Friends?
What are friends, really?????

….I am my only reliable friend.

I GET TO CUDDLE HIM TO SLEEP TONIGHT AGAIN! WOOOOOOOOO-HOOOO~~~~~

I am fucking broke from shopping. My wardrobe is honestly exploding. I need to do justice to these beautiful clothes and go out more often instead of staying at home like a loser!

It’s 2am now, I just got back home and just done with checking emails, replying messages etc etc. By the time I bathe and get everything done before I can go to sleep, it’ll be 3+

And James is coming over tonight. Well, later, supposedly. We were @ Cine together just now but he went to Malaysia for awhile so here I am, trying to convince myself there’s time for everything.

I still can’t get over it lor! SO FUCKING EARLY!!!!

The sun wont even be shining then!

And it’s going to last all the way till maybe 1. And I only have 1 hour of sleep (if I’m lucky) otherwise none at all.

To make things worse, I’ve been out shopping the entire day with Esther today and stayed out till 1+

Esther Chia, I know you’ll be reading this so know that I AM EXPECTING PHOTOS! Lol.

Geez I cant stop whining about how tired I am

Looking on the bright side, though, I’m having the shoot with AH POH tomorrow! Damn excited I could bring her along cuz I’ve never done a shoot with a girlfriend before. I HOPE IT’LL BE FUN!!

Then after my shoot I’ll go back home where I’ll have lunch with James (who would just have woken up at around 1+ or 2) then we’ll head to downtown east to go to WILD WILD WET!!!

Super super happy plz, I love WILD WILD WET. If no time then watch What Happens In Vegas

I wanna watch that show sooo bad. I know I’m so outdated!

But you know what? I’VE CAUGHT THE PREMIERE OF NARNIA ALREADY, and you haven’t, so there. HAH. (unless you’re a nuffnanger too)

I need to STFU, bathe and go to sleep already. Pray for me that I have at least an hour of rest.

Oh yea, did I mention my Chinese O LVLS is in a day’s time? Hmmmmm.