I was so busy working that I have completely forgotten that my boyfriend’s birthday is in 2 days and I still have NO idea what to give him.

Remember how I kept complaining about not having a job? Well, I finally got my lazy ass to ask my friends to introduce me some jobs – and shockingly, I’m gonna be quite busy with jobs in the future already! Yay. Money money money. Love the pay~

I have FOUR photoshoots altogether next sunday!! WTF.

I’ll be working at Le Meridien Hotel in Orchard Road as a promotor model for the International Sound & Sight Exhibition – I’ll be promoting this really snazyy Hi-Fi system.

Sooooooo if you have nothing better to do and you’re heading down town on those 3 days, come and look at the exhibition and of course, VISIT ME!!

Cause I think I will be damn sian. Haha.

here’s some (bad quality) neoprints we took at cine few days ago: 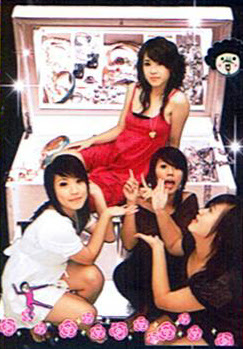 Hahaha I think this picture turned out really cool because I look like the Queen in the picture.

WHAT? CANNOT AR? My red dress and the jewelled background plus them squating on the ground and making those “omfg it’s jessica” actions are all part of it lor. LOL 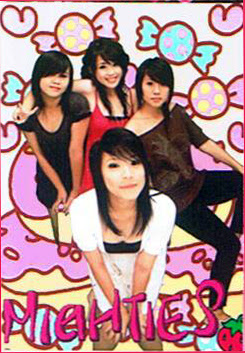 Don’t you wish your bitches were hot like mine? 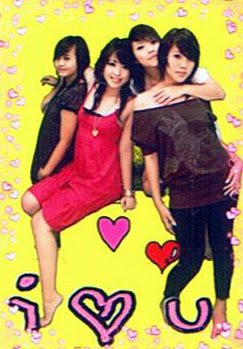 I do love them. (sometimes only HAHAHA. ok i need to stop being such a bitch) 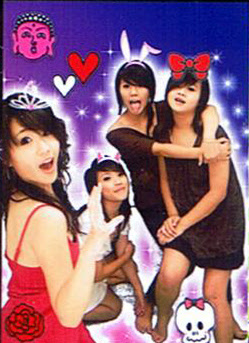 Am totally digging the hairbands thingy cuz I think each hairband is absolutely perfect for our pose and outfit.

Besides the cool sharp contrast with the colours and stylo headbands, you know whats the next best thing about this neoprint?

CHECK OUT THE HOT PINK BUDDHA I ADDED AT THE TOP LEFT HAND CORNER OF THE SCREEN!!!

Undoubtedly most omfgingly amazing neoprint ever. Looking at it makes me rofl.

And the skull with a retarded pink ribbon on top of it which is on the bottom right corner of the neoprint. Hehehe.

Genius right? Of course la. I was the one who decorated the entire thing lor…*ahem* 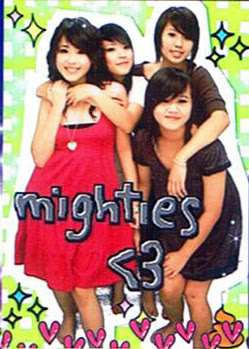 WE’RE THE MIGHTIES! (Ok I dont know whats up with that name la, don’t like it much but its pretty cute)

Only 4. 2 other bitches missing. One is a far away bitch in America and another is a kuku who doesn’t wanna take neoprints. Bah!

Know why the bottom half of my body looks so fat?
It’s because I was bending my knees in the picture. That bloody Joanne put her arms around my neck and obviously she’s a midget (LOL I still love you Joa) and she caused me to be unable to stand straight!!! That bugger.

Ever heard of an “identity problem”?

Yeah? Well, you’re reading the words typed by someone who is having an identity crisis.

You must be wondering why I’d say that.. 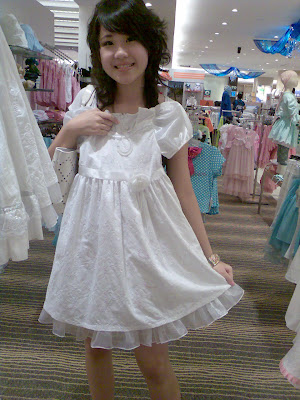 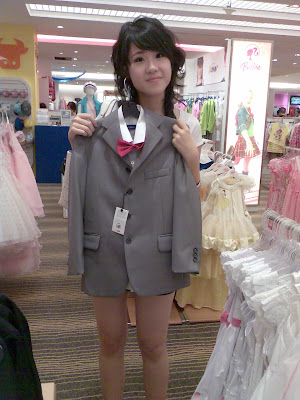 I just wanna be a princess in a fairytale. 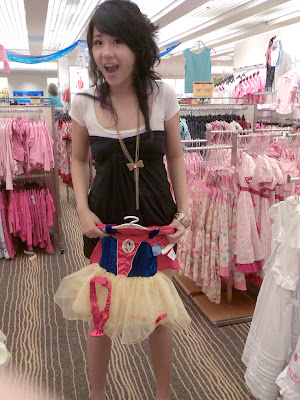 Mirror mirror on the wall, who is the fairest of them all? (Rhetorical Question. Jessica, duh. xD) 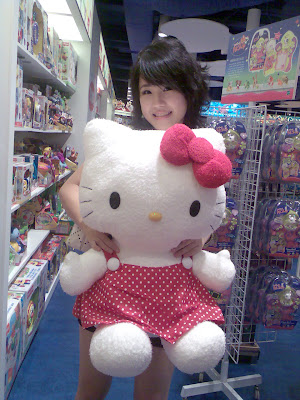 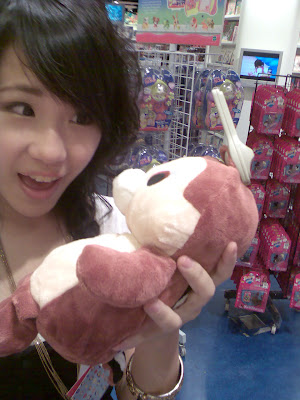 ALVIN AND THE CHIPMUNKS!!!
The chipmunk is wayyyyyyyyy adorable plz. (even though there’s this horrible awkward tag thingy sticking directly out of his head)

A friend who saw this picture asked me,
“I can’t figure if you’re trying to give the “this is so adorable” look, or the “What the fuck is this ugly thing” look.”

And so I replied, “Actually, I was giving the ‘AHHHHHHHH. How adorable!! So cute that I’m gonna eat you. look.”

And, speaking of eating,

Me and Esther ate aloooooooooot that day la. We spent all our money on food, HAHA. Gluttons!

And so we sat at Gelare, ordered a brownie + cheesecake + sorbet. (and that was 30mins after we already had 1 ice cream and a 3 course-set-meal)

Then came our desserts. 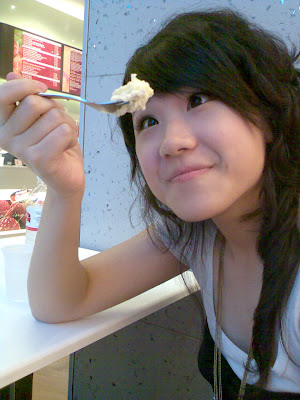 Jess: “No, how can?! Just loooooook at this mouthful of heavenly goodness on my forkk.. Hehheh. *eats*”

Esther: “Fine whatever, Be that way ya. The rest is all MINE. *stuffs entire cake into her mouth*” 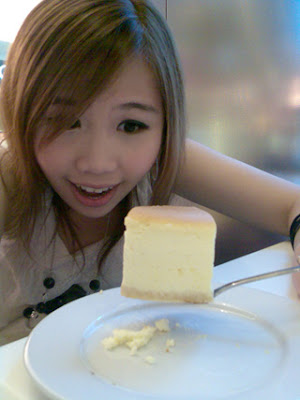 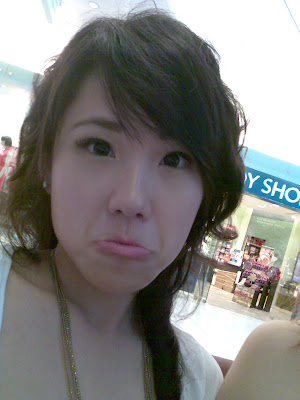 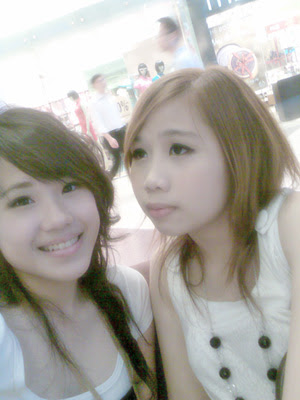 Alrightyyy, I’m gonna head to bed now. It’s 5am already – been blogging for a longgggg time. You guys better love me for that

Oh, and on a random note, JAMES BIRTHDAY IS NEXT WEEK!
Aghh… I don’t know what to get him! Suggestions @ tagboard PLZ.

And speaking of special occasions, 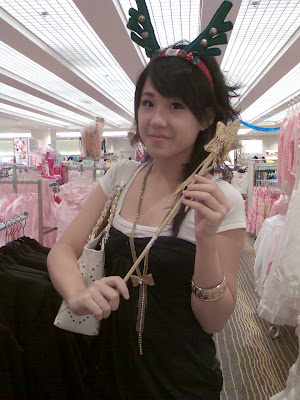 Cause I’ve been a good lil girl.. – I was against god. And santa never liked god.

Santa told me not to tell you, but I will anyway because I thought people ought to know that Santa is actually Satan‘s little brother with a round stomach in a funky get-up.

And you thought the similarity between the two fella’s names was just a weird coincidence?! You think Santa is dressed in red for nothing?

So what are you waiting for?

I think Santa is better anyway, at least he leaves you a nice present every Christmas. All god does is wake you up every Sunday morning to attend church, but Santa actually lets you sleep in while he secretly gives you a lovely present.

I get quite a few blog readers a day, yet very little comment / tag.

But isn’t it quite odd to always be reading my blog yet not be talking to ME, the wonderful blogger? =o

I’ve added this cute lil messaging system called Chatango at the right side next to my tagboard!! =D

Which means it’s very convenient for you to send messages to me already. Woot.

And no one else can see our private conversation, unlike the tagboard..

Ewww I don’t do online dating anyways. I’ve got an amazing boyfriend already (who is on his way to my house right now btw hehehe yay)

If I don’t reply you,
I’m either AFK or busy or I don’t feel like replying you. Simple

And I’m not very unfriendly afterall la (I think), as mean as I sound in my posts.

One thing to note though, the Chatango messaging system is added for fun and mainly for short, non-important messages: Should you have anything that you want to tell me and you wanna make sure that I do see it, leave it in the tagboard because I pay more attention to the tagboard.

I might get bored of the Chatango and ignore it after awhile. LOL.

So what are you waiting for?

Talk to me online now!! Because I’m soooo bloody bored during the holidays. Urgh.

What better way to cheer myself up than to let my lovely readers entertain me eh?

Go on, tell me all about how much you love me & my blog AHAHAHA. (or how much you hate it, suits you, even though i probably wont reply eh)