Knowledge, feelings, thoughts, scenes, actions, stories and everything else you can possibly imagine: all in a piece of paper. (fine, many pieces of paper)

So simple it is, although nothing less than a wonder – created for the pleasure of every human who sets their eyes on it.

Those who fail to appreciate the art of literature are indeed unfortunate,

for they are most ignorant of the pleasure derived from the indescribable journey that awaits them in every book.

And the day one comes across a book so amazingly brilliant that it gets you deeply inspired,

is the day one should rejoice.

As a literature student, I couldn’t resist the urge to share with you a book which I found in a local bookstore recently.

Beautiful things in life should be shared, and my lovely readers deserve nothing less than that!

It is not only a book,

it is much more than a book,

it changes lives and finally reveals the truth that everyone has been trying to deny.

I must say, it is hardly a wonder that this book is an international bestseller.

I shall promptly proceed to present to you the book itself, as no form of literature is able to do this book any justice in expressing its absolute brilliance….

I now present to you: 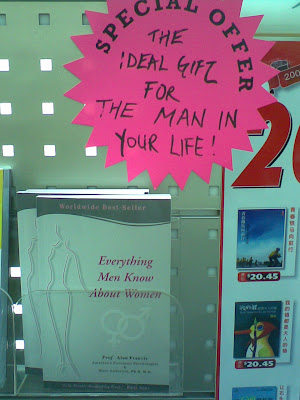 Everything Men Know About Women.

Attracted by it’s intriguing title, I picked up this beauty 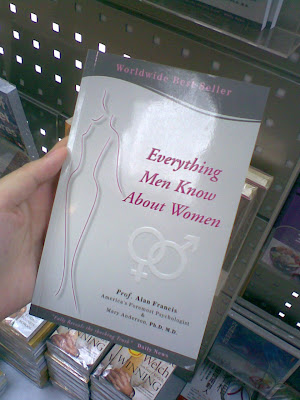 and was most amazed to discover the shocking truth it revealed.. 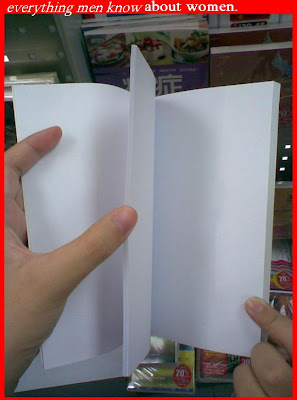 I am deeply inspired.

For you, I’d bake one whole batch of yummy cookies!

It’s been stay-home saturdays for the past few weeks. God, I’m turning into a no-life idiot.

Then again, always going out to town and watching movies and shopping all the time is also pretty lame, so I guess it ain’t too bad.

But today was a lil different, Today was a baking day.

Eunice decided to come over and we baked cookies!

Eunice called me in the morning and she was like, “So do you wanna bake today?”

And so she came over in the afternoon to make a mess out of my kitchen: 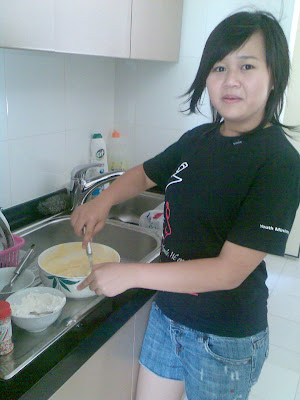 a blur cockhead who can look freaking bewildered when she’s simply only mixing egg and butter together.

Even though sometimes, she’s so sotong that I am amazed. It’s like I’m tempted to knock on her head cuz I think it will make this cool hollow sound.

I haven’t baked in like, MORE THAN A YEAR or somethingg! But baking is so easy and fun, I love it. My mum always complains that I kept bugging her to buy an oven, but it’s already been sitting in our house for 2 years and yet I haven’t used it just once.

Well, the day has finally come! And all thanks to Eunice, if not god knows when I’d touch that oven. 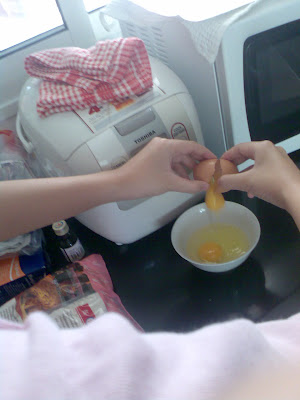 Me cracking eggs! Hehe. I LOVE to take an egg out of the fridge whenever I’m bored at home, and then I’d go up to my maid and be like “Hey Intan, catch the egg!” and I’d throw the egg towards her way and watch her freak out, trying desperately to catch it.

ESPECIALLY when she misses and it goes “splat” on the ground! 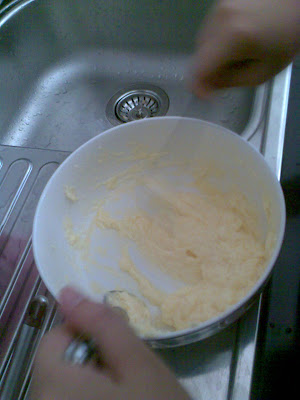 I like to mix the batter with my hands cuz it’s uber fun, but slightly gross at the same time, when all the batter goes into your fingernails. 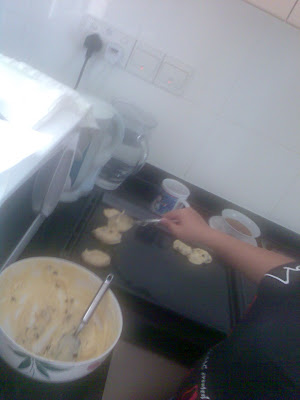 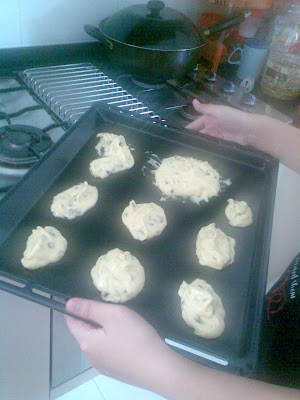 La la la, in it goes into the oven.. (I know the top right two piles of batter look extremely weird, the extreme top right one is supposed to be heart-shaped!)

And after about 20 mins of baking… 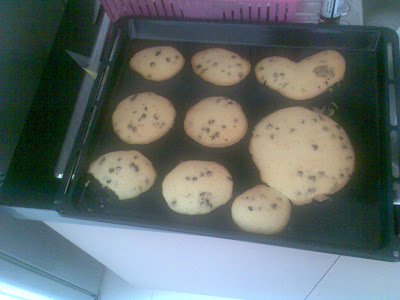 I know they don’t look very appetizing here, but they taste great OK!

Look at the top right one

supposed to be a heart shaped, turned out kinda ugly.

And that big round blob is so cuteeee. 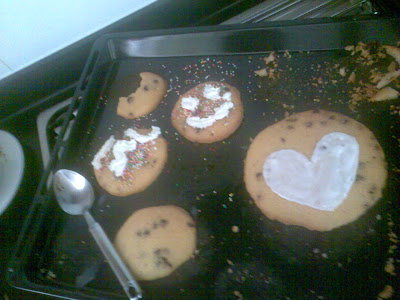 After eating up 3/4 of the pastry, messed around with the remaining pieces. LOL.

Guess who’s the heart-shaped-cookie for? 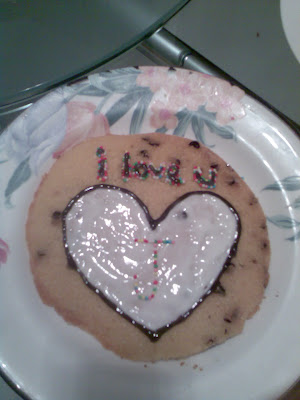 I still think about you everyday,

even though it has been some time now.

I don’t know what to do because you keep coming back to make things confusing for me,

I know I should pull away but I just can’t – And I’m sick and tired of being stuck in the middle of nowhere.

I wanna run, run run away but I end up running back to you.

I just don’t understand why, 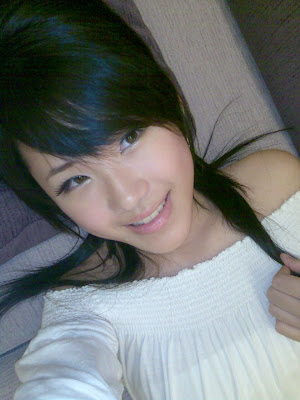 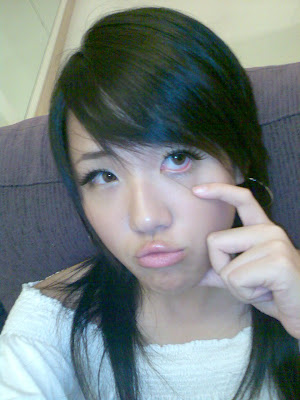 bleh.
nothing quite makes sense anymore..

I wanna say a big thank you to every single person who’s wished me happy birthday!!

You guys are so sweet.

I’m really sorry I didn’t reply to all the birthday messages, cuz there’s seriously way too many. I received birthday greetings from more than 100 people in total! Wahahaha. I know, I’m so thick-skinned, I like counting how many presents and birthday greetings I receive cuz it’s fun. But it’s no surprise that so many people wished me happy birthday, since it was on my MSN xD

How many people actually remembered it themselves? Makes me wonder..

Anyway, I’m kinda touched during this birthday. I thought that no one would really bother about it since I didn’t bother about it much myself, but friends whom I didn’t think would call actually called sharp at 12am that my phone kinda jammed up with all the messages and incoming calls!

I didn’t have a big celebration on that day cuz I didn’t feel like it, so James just stayed over and we went out the next day.

I’m not going to go into details about my day yesterday yet because I don’t have all the pictures with me (stupid kukuhead didnt send it to me and he went overseas!!) so I’ll post it when he gets back.

I hate it when people owe me my photos! I want to killllllllll them. So birthday post another day.

Anyway I had math tuition after my school which ended at 2 and tuition-ed all the way till 7. Damn, so hardcore. My brain is more deep fried than chicken wings now.

I WANT TO MARRY TO A SUPER HOT RICH ANGMOH (who loves me la, of course) SO THAT I BECOME HIS LOVELY ASIAN WIFE

And I’d never have to make these fragile hands of mine work again,

instead I’d apply Chanel lotion on them every single day.

My fantasies become wild whenever exams are drawing near

So like, math is going to drag my grades down SO BAD. I swear to god I can’t even score more than 10 marks for A-math, and for E-math I could probably do 20 marks.

During tuition today when my tutor was explaining some Math thingy to me (obviously I don’t even remember what she was teaching) I interrupted her and asked,

“Why am I learning all these math stuff anyway?”

and she replied, “So that you can pass your examinations.”

And so I said, “How is this going to help me or 90% of the people out there who won’t have to deal with much math during work?”

Her reply: “It doesn’t help if your work doesn’t concern math. It just helps to train your brain to work logically“

is this how people who are good at math think?

So basically, she’s telling me that I’m stressing so damn much and working my ass off for hell lots of Math formulas for a few good whole years when I would probably never come across those formulas again in my entire lifetime,

just so that I can “train my brain to work logically”

I think everybody in this whole damn world is just so fucking brainwashed, I think I’m the only normal one left.

Is it me or am I only one who thinks that

It isn’t logical in the first place to make students work so hard for Math, which won’t be very useful to most them when they grow up.

What a whole lot of bloody PRECIOUS TIME has been wasted!

How has learning about Angles and Triangles and Logarithm helped you in YOUR life, huh?!?

(and even if it has helped you, i don’t want to know, loser)

Except for doing those miserable math papers, of course!

Whoever decided that everybody should learn math obviously has a short dick or something, so he wants the world to be miserable like him.

Why don’t they have SHOPPING classes instead?

And then everybody would go “oooh, ahhh” when they see how many pieces of clothing I bring into the changing rooms and how fast I can change in and out of them,

and they’d clap whenever I intelligently pick out the cutest outfits from the store with the most awesome prices.

Aiyah, I’m just feeling the pressure from the exams lahhh.